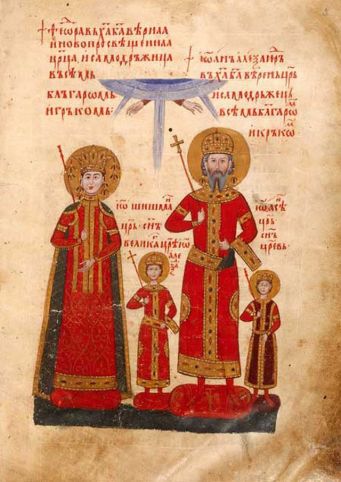 Around 1340, Ivan Alexander of Bulgaria married his second wife, Sarah-Theodora, a Jewish woman who converted to Eastern Orthodox Christianity, retaining her Jewish name but adding the baptismal name Theodora. This union was an exceptionally rare occurrence in medieval Europe: no other reigning Christian monarch chose a Jewish wife. Once again, Bulgaria’s unusually tolerant approach to difference, to otherness, is striking.
Elsewhere in Europe, bloody pogroms had been common since 1007. England had driven all Jews from the British Isles in 1290; France had been persecuting French Jews since the start of the Crusades in 1096. With time the persecutions grew harsher: not only Jews as people, but the physical evidence of Jewish existence was perceived as dangerous. From 1317 on, French Jews were forced to wear a yellow Star of David. In 1240, 12,000 hand-written Talmuds were burned at the stake in Paris. In 1821, the great Jewish-German poet Heinrich Heine wrote of the event: “Where they burn books, they will eventually burn people.” Intriguingly, this line from his play, ALMANSOR, is spoken by a Muslim.
Farther south, Jews and Christians had lived in relative safety since the Muslim conquest in 711 of the Iberian peninsula (Portugal and Spain). The “Convivencia” (coexistence) of 900—1200 in what was re-named “Al-Andalus” was for many a Golden Age: Jewish scientists, doctors, poets were respected at court. When the fundamentalist Almohad dynasty seized power, Jewish life became more uncertain.  Europe’s Christian monarchs united to invade Al-Andalus: gradually Spain’s Muslim cities fell to the Christian “Reconquista”. In 1492, on Tisha B’av – still a Jewish day of mourning -- all Jews were expelled.