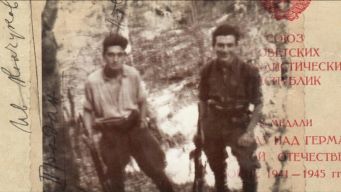 Angel Wagenstein and his cousin and close friend Moise Kalef in the forest, summer 1943

After the failed Communist revolution of 1923, Bulgaria was in essence a fascist monarchy, overlaid with a thin veneer of parliamentary democracy. Tsar Boris III nominally controlled a government of extreme conservatives, closely allied to Germany’s Nazi leadership.
“In late 1940, the National Assembly enthusiastically passed the 'Law for the Protection of the State.' It was an anti-Semitic decree copied directly from the Nuremberg laws and which was directed, in terms of its final objectives, to implement the ‘Final Solution of the Jewish Question.’"
Angel Wagenstein
Bulgaria officially became part of the Axis -- Germany, Italy, Japan – in early 1943. Wagenstein joined the resistance movement before his eighteenth birthday, eventually leading a particularly brave Jewish partisan brigade. His most notorious feat was using dynamite (and as an accelerant, highly inflammable film stock) to blow up a Sofia warehouse. The Wehrmacht had filled it with 30,000 sheepskins – ready for shipment to the Eastern Front, where thousands of German troops were dying in the snow. “I lost my hair, eyebrows, eyelashes. My jacket caught fire -- I remember rolling on the ground on top of some sheepskin coats, and then running.  I managed to flee, slightly charred.  But the police found the batteries from my flashlight on a windowsill -- with very clear fingerprints. Mine."


Wagenstein, Moise, and three others were soon caught robbing a wealthy jeweler to buy food and shoes to tide his brigade over the winter: like the Germans, their partisan comrades were dying of the cold. “Moise was killed in Sofia on November 21st, 1943.  I managed to escape. But I was arrested ten days later, interrogated, tortured and sentenced to death.”