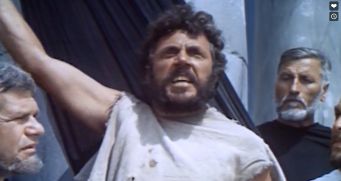 “AESOP is the most censored, and the most politically problematic, of any film ever produced in Bulgaria.”
Velina Petrova
The film is one of Wagenstein’s most mysterious -- a tragicomic allegory about the meaning of resistance. In the character of the annoyingly persistent truth-teller Aesop, AW demonstrates how wit and humor can become powerful weapons for the powerless, wearing away at the monolith of imperial might – while also clearly showing the significant risks involved.
“Completed at the end of the Prague Spring, AESOP became a direct reflection of the fears this revolt instilled among the Communist leaders of Eastern Europe.”
Velina Petrova
Prague Spring was a doomed attempt by Czechoslovak reformers to invent a freer, more tolerant version of Communist society: “to democratise socialism and open it up -- to get rid of the violence and take into account the will of the people to move towards what Vaclav Havel defined as “socialism with a human face” (AW) The Spring was brief, lasting just six glorious months. On August 20th, 1968, it was crushed with shocking speed and brutality when Soviet armies led other East Bloc troops in a massive tank invasion of Czechoslovakia.  Among the casualties was this film and the dream of a more open Communist society.
“No one could believe that I wrote the screenplay for AESOP before the Soviet invasion of Prague.  But it was a whole year before that” (AW)
One of the many legends surrounding the figure of Aesop is his warning to the citizens of the small independent island-state Samos that occupiers cannot be trusted to relinquish power.  The analogy with the USSR’s post-1945 occupation of Eastern Europe could not be clearer.
AESOP’s theme of rebellion by a small nation against an occupying imperial power seemed vital and timely. In retrospect, it’s astonishing that lines like “We must find other ways of making the occupiers leave” were approved at all, at such a precarious Cold War moment.

AW: “And something very strange happened – so strange, it sounds like I made it up. On the very day we were shooting the 'Invasion of Samos' scene, Soviet Bloc tank brigades, including Bulgarians, invaded Czechoslovakia. Suddenly the film shoot stopped: the entire Czech team, hearing the news, put down their gear and disappeared.  When I heard that the Bulgarians were part of the invasion, I started to cry, in my tent. Next day, State Security visitors arrived, demanding to know how I had gotten information about the Soviet invasion before it took place.”
The film was immediately banned. “The General Director of Bulgaria’s national film studio personally sat down and cut and cut and cut 600 metres of the finished film. He cut the master negative!  It was transformed from a giant into a dwarf… that’s how the film was released, lame and crippled, one leg missing, one ear torn off ...”
The Bulgarians showed AESOP in what AW calls its “circumcised version.”  The Czechs just locked it away, unseen but intact, and it received its Prague premiere in 1990.